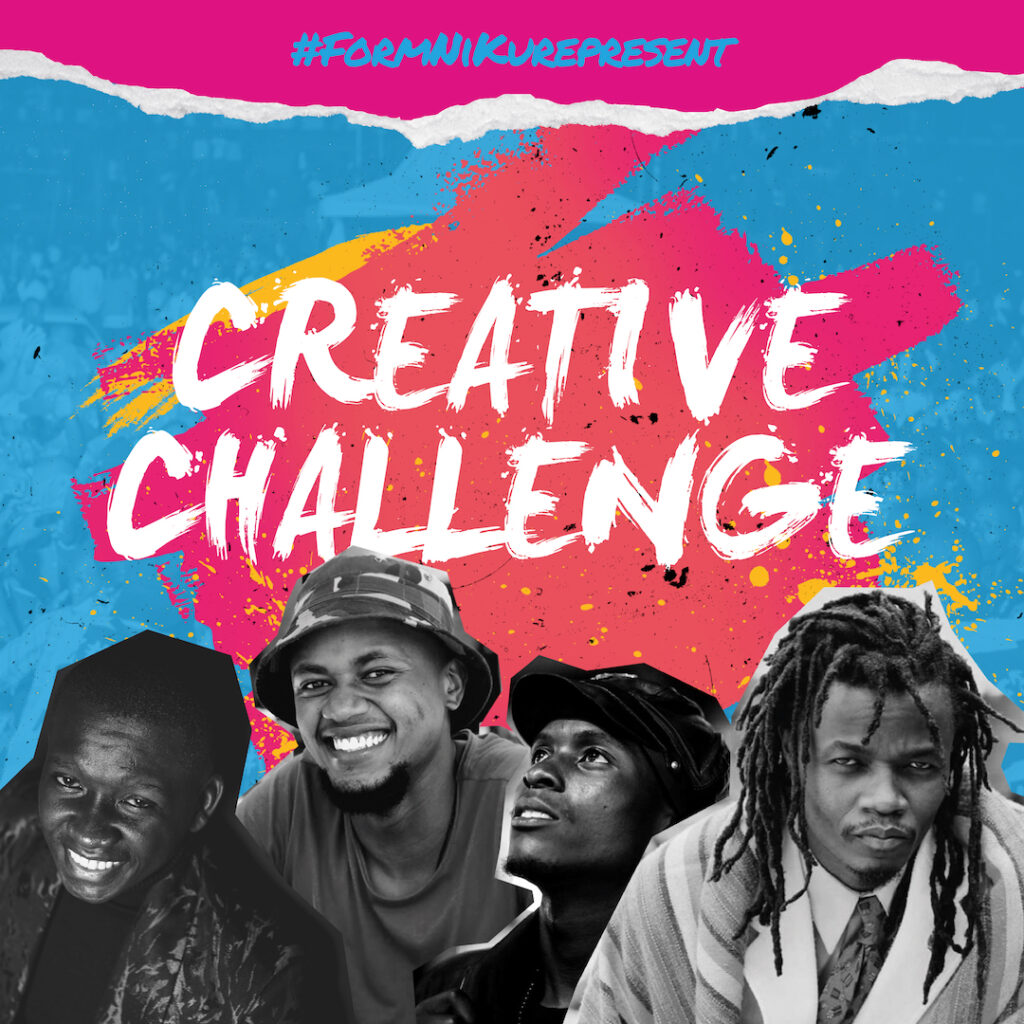 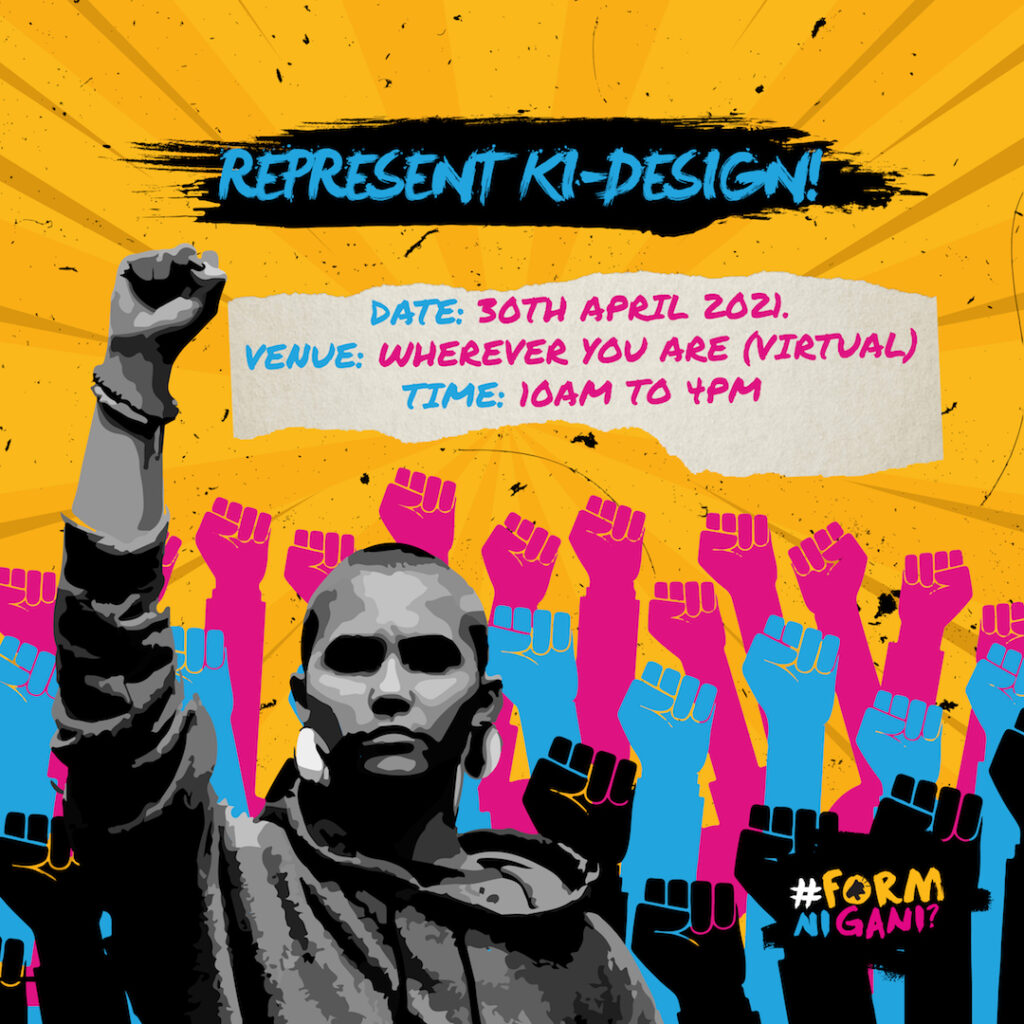 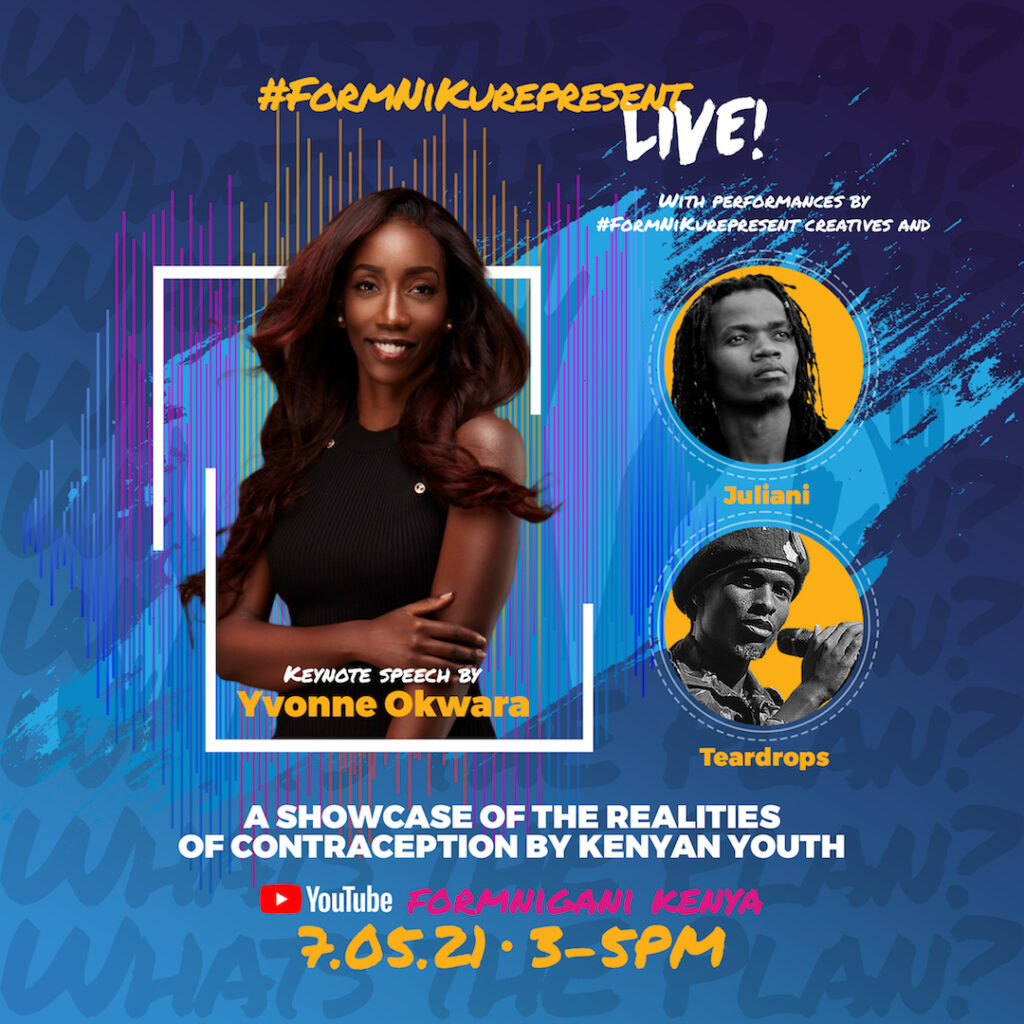 #formnigani maintains momentum during the pandemic

The social movement learnt valuable lessons when COVID-19 forced it to pivot from in-person to online.
June 16, 2021

Despite the right to family planning being guaranteed by Kenya’s Constitution and Health Act, many Kenyans still lack access to both contraception information and methods. In fact, 49 per cent of all pregnancies in Kenya are unintended. These unplanned pregnancies are a major contributing factor to Kenya’s high number of maternal deaths, with an estimated 6,300 women dying each year during pregnancy and childbirth. In addition, more than 2,600 Kenyan women die annually due to unsafe abortions.

Young Kenyans have also come to view contraception as critical to achieving their dreams. Many Kenyan youth are aware of the connection between when they have children, how many they have, and their success later in life. As a result, young Kenyans have routinely expressed interest in learning about and accessing contraceptive methods that fit their needs and lifestyle.

In 2016, the #formnigani platform was launched as a creative movement that capitalises on young Kenyan’s desire to improve access to publicly funded contraceptive services. From its beginning, the platform has been led by young Kenyans, artists, and opinion shapers. It has helped a new generation of Kenyans to more openly discuss family planning and voice their needs on the topic to policymakers.

Despite these challenges, #formnigani, which had previously relied on large-scale public events to share its messaging and rally support, quickly adapted to carry the momentum of its in-person following to online spaces. Looking back at more than one year since the pandemic began, the platform’s rapid transition and lessons learnt along the way can serve as useful inspiration for other social movements facing similar challenges.

Prior to the pandemic, a key activity of #formnigani was establishing and running Future Think Tanks. In 2019, the platform brought together youth, activists, academics, and influential artists and musicians in person to explore how different policy choices and trends related to contraception access in Kenya could impact the country socially and economically over the coming decades.

By applying futures thinking methodologies that blend data, imagination, and personal experiences, think tank participants developed four possible future scenarios around access to contraception, ranging from the ideal to the dystopian. These scenarios and the resulting report became the basis for a public relations and social media campaign that sparked a national debate on the importance of increasing domestic funding for contraception access. 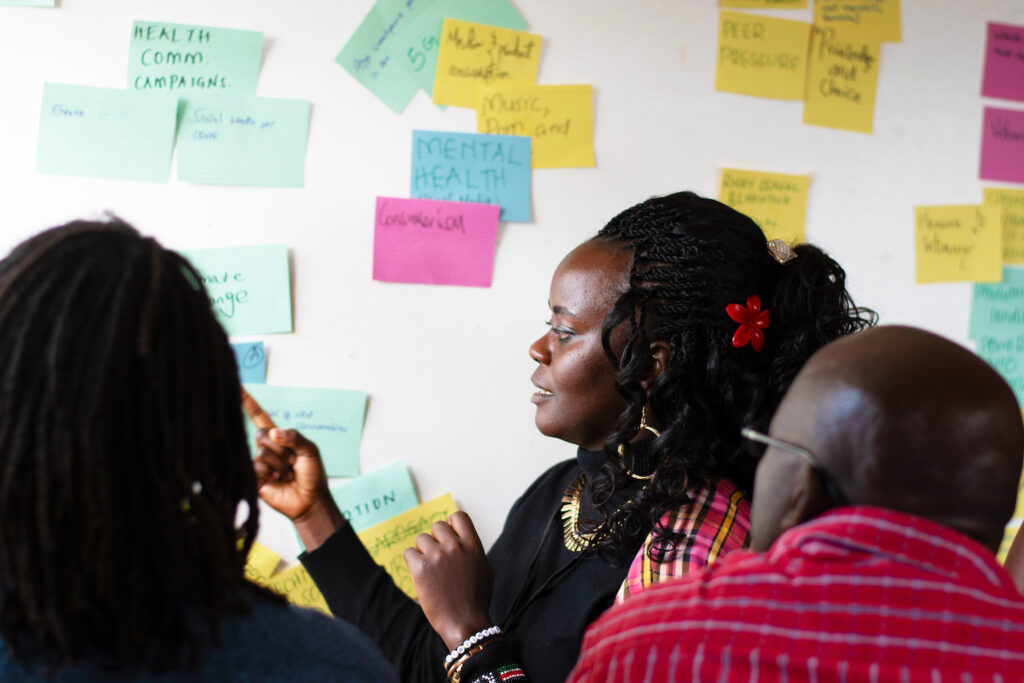 One of the adverse scenarios threatened to come true when Kenya reported its first COVID-19 case in March 2020. The think tank’s dystopian storyline had predicted a future in which the country was unable to make commitments to fund public family planning services because it was overly reliant on external donors when an unforeseen disaster strikes. To raise awareness of this potential crisis within a crisis, #formnigani virtually reconvened its Future Think Tanks to further explore the ramifications of different policy decisions around family planning during the pandemic and to formulate an advocacy response.

The team had to react quickly and creatively to adapt the in-person think tanks into an online model. Facilitators made use of take-home assignments and smaller group sessions to reduce the length of video conference calls, and combined groups from Nairobi and Bungoma. Bringing participants together in this way saved travel time and helped participants share experiences across locations, allowing them to look at issues from the perspective of both urban and semi-rural contexts.

#Formnigani combined input from the virtual think tanks into the Young Kenyan Voices: COVID-19 and Contraception report, which highlights the long-term social and economic consequences of deprioritizing and underfunding contraceptive services during the pandemic response. The report received extensive media coverage across Kenya in print, broadcast, and online outlets, earning 16 million impressions and keeping the topic of contraception in the public discourse.

#Formnigani’s past social mobilisation events had pulled large crowds, from the pregnant men’s march through the capital to a visit by Kenya’s first female president from 2063. However, social distancing restrictions brought on by the COVID-19 pandemic meant that #formnigani had to rapidly pivot from focusing on working in physical spaces to working in online ones.

While the platform’s social media growth had been a secondary goal next to hosting large-scale events, such as concerts and sports tournaments, the organic growth in social media followers driven by people attending these events helped #formnigani to build a sizeable digital footprint. Having this existing follower base eased #formnigani’s transition to online-only once the pandemic began. It also demonstrated how social mobilisation efforts can benefit from the synergistic relationship between in-person and online presences by working to build up both simultaneously.

Another key to the platform’s successful transition to a digital-only presence was #formnigani’s ability to tap into its existing network of creative influencers, including poets, artists, musicians, and writers who had supported previous in-person events. #Formnigani worked with these influencers to develop content to share online and promote the platform’s creative challenges to youth. 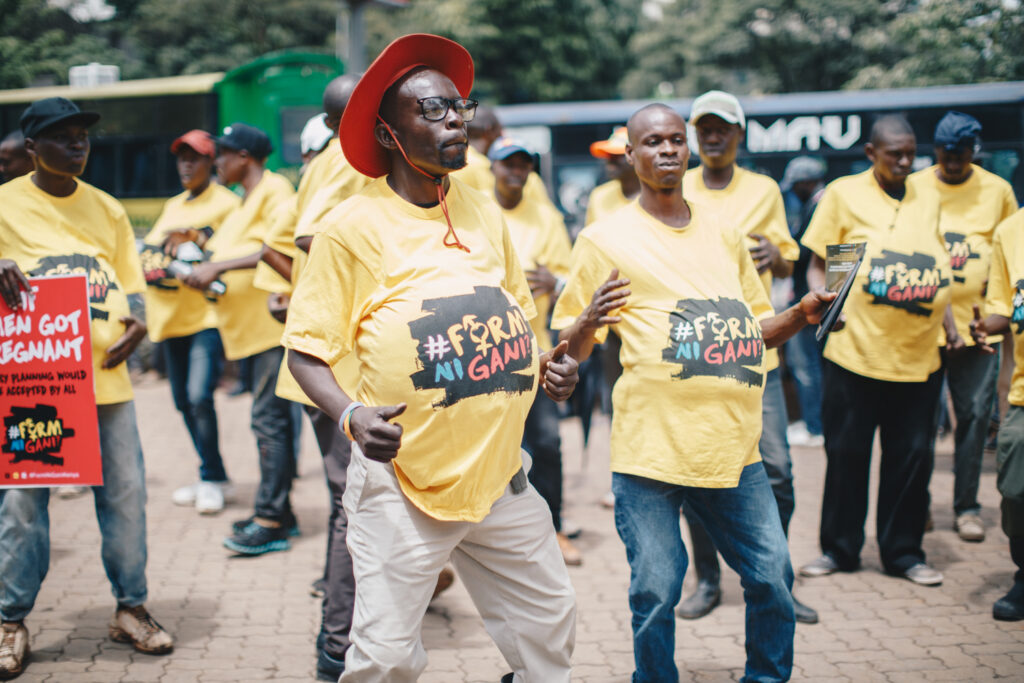 By leveraging these already established relationships and its popular hashtag, #formnigani was never constrained to just reaching the followers of its own Facebook, Twitter, and Instagram pages, but rather was able to amplify its messages across multiple networks. Utilising multiple influencers also led to messaging that resonated with, and was trusted by diverse target audiences. In addition, this entirely organic and dispersed model of outreach meant that #formnigani didn’t rely on paid ads or one single large outlet in order to reach millions of Kenyans.

For the #formnigani team, a key part of achieving this wide organic reach was building up credibility with its target audiences over time. “#Formnigani has always been about amplifying authentic youth voices around a subject they relate with,” said Andy Awiti, Creative Strategist on #formingani. “It was, therefore, a matter of transitioning the movement to a more contextually relevant platform as opposed to a reinvention, and this proved impactful and more inclusive.”

In the year following the COVID-19 outbreak in Kenya, #Formnigani leveraged its active online following to hold two creative challenges, calling on young Kenyans to voice their concerns on underfunding public contraceptive services during the pandemic. The #formnistari (“the plan is poetry”) challenge ran in May 2020 and the #FormNiKurepresent (“the plan is to represent for fellow youth”) challenge ran from December 2020 to January 2021.  Altogether, the challenges earned more than 7 million impressions on social media and helped drive the national dialogue on maintaining support for public contraceptive services during the pandemic.

Engaging Both Sides of the Equation

While the #FormNiKurepresent challenge created a body of evidence from youths’ experiences, hopes, and concerns, the new #formnigani public relations campaign built on these key messages by sharing them on channels where policymakers pay the most attention. These recent efforts leveraged print, online, and broadcast media and used influential voices that were familiar to Kenyan politicians and community leaders to frame #formniagani’s message on contraception access in a relatable policy context.

In this way, the platform crafted content and materials to address both sides of the equation, supporting grassroots social mobilisation as well as raising awareness of the issue among policymakers. In April of this year, #formnigani hosted a workshop for youth advocacy groups called Represent KiDesign to help participants understand how they can take a systematic approach in their work to expand contraception access.

This was followed by the #FormNiKurepresent Live virtual event which brought together creative content from young Kenyans, including spoken word, music, and a short film. The event also involved discussions with thought leaders on the realities of contraception access during the pandemic and how diverse stakeholders can help safeguard young Kenyan’s contraceptive rights. 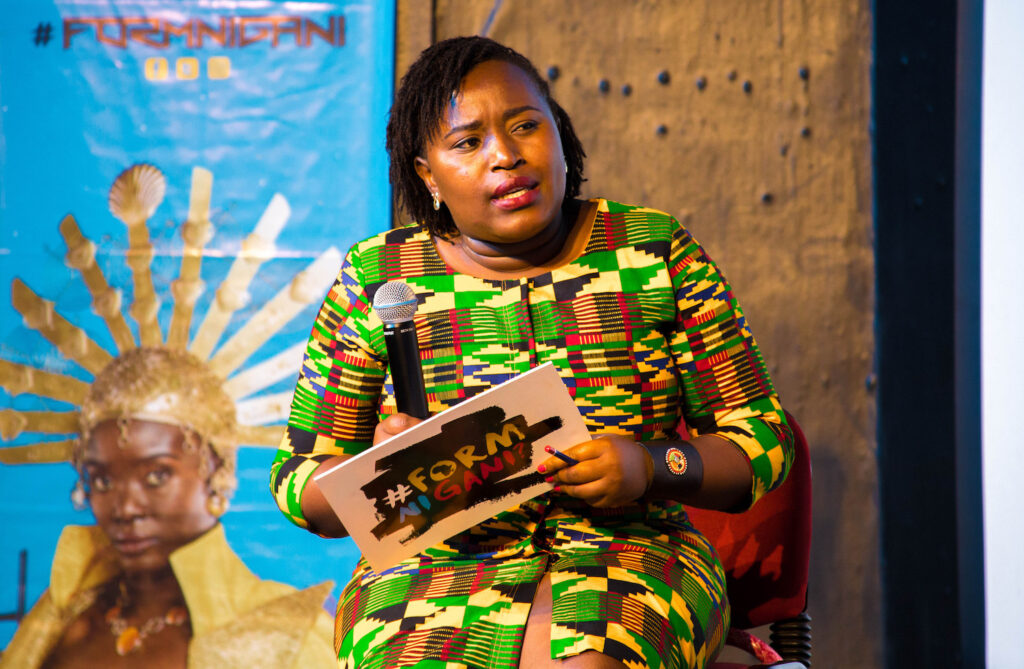 #Formnigani looks to continue growing its robust following in Kenya. Since 2016, the platform’s messaging has been seen repeatedly by tens of millions of Kenyans, earning 376 million impressions on social media, 22,2 million in print media, and 94.1 million in broadcast media. The programme also helped support a 6 per cent increase in budgets for family planning in target counties and achieved a brand awareness of up to 50 per cent among Kenyan youth aged 19-35.

As its current obstacles are overcome and new challenges emerge, #formnigani remains committed to using its online and in-person presence to help more Kenyan youth voice their needs in 2021 and beyond.