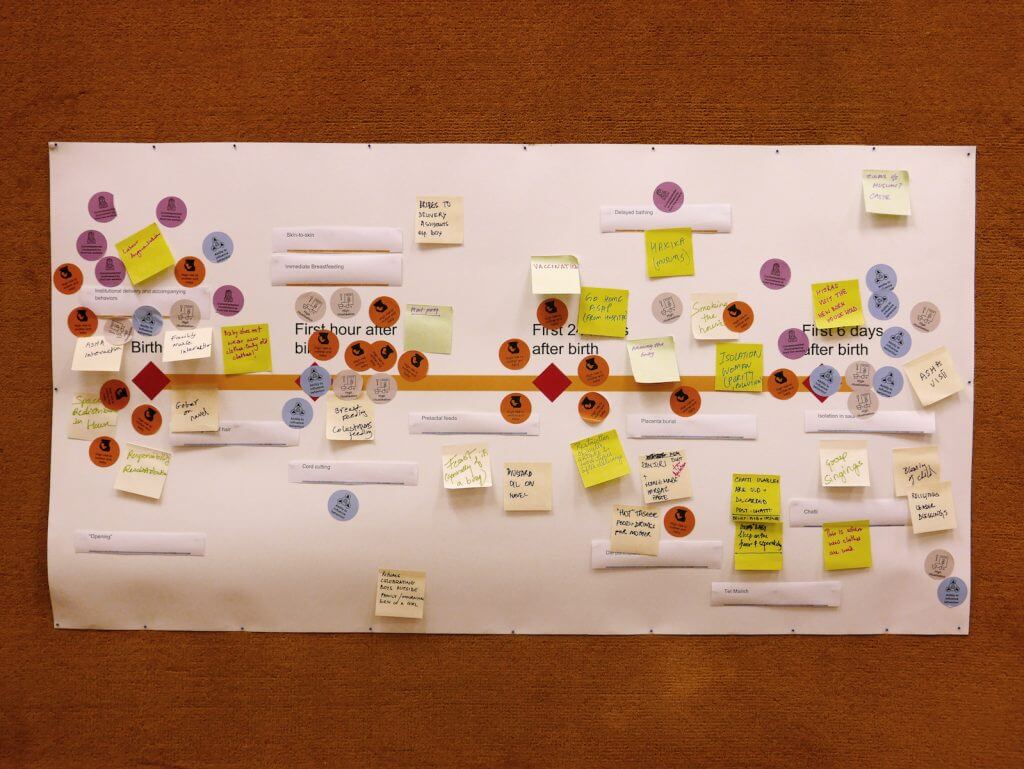 Healing baths and hand gestures. Rituals take many forms around the world. M4ID’s RISE project studies their role in public health in India. Last month, the project organized the first advisory board meeting in Delhi.
October 31, 2018

“You get a living earthworm and cut it into three pieces. Then you fry the pieces on a pan. After frying them, you add the pieces to boiling water and make a bath. You can use this solution to give a bath to a person with a problem, but it is important not to tell them, what is in the solution”.

“– Can anyone tell me what this ritual is intended to achieve and which country and time period it might be from?”

The rituals and customs around the health care journey of the mother and baby were mapped by the participants.

In September, Associate Professor of Psychology from the University of Texas at Austin, Dr Cristine Legare, gave a presentation on cultural rituals to a room full of experts.

Legare has spent years studying cognitive development, and how the human mind enables us to learn, create, and transmit culture. Rituals are an important part of cultural behavior.

From January 2018, she has been leading the research for a two-year project called RISE, which runs through to early 2020. M4ID works as a design partner on the project and together with Legare’s employer, The University of Texas in Austin, the project team seeks to understand the rituals and motivations surrounding health service delivery and aims to leverage those rituals to improve the quality of services delivered by front line workers in Bihar, a state in Eastern India.

An advisory board was called together to advise the project, as it is embarking on its key stages, data collection being the first part. The group is comprised of experts from academia, research institutions, and organisations working in the fields of health and development, amongst them the Bill and Melinda Gates Foundation, BBC’s development charity BBC Media Action, Jawaharlal Nehru and Ashoka universities and development organization PCI global.

This was their first meeting.

M4ID project team and the University of Texas Austin recently embarked on a research trip to Bihar to find out more about what was the local view of the pregnancy journey and the rituals, as well as traditional and new behaviours that were connected to the journey.

The team wanted to to build an initial understanding of the life and work of the front line workers and their routines and tools to understand the context better. The research trip amounted to a body of knowledge related to pregnancy and childbirth: from how pregnancy was confirmed and how treatment and support for the new mother was arranged, to birth and the time afterwards with the newborn.

Now, the newly formed advisory board was called together to introduce the work of the project so far, and inform them of the next steps in order to solicit their feedback and guidance. In addition to outlining the next steps in the project, the goal was also to build a sense of cohesion among the partners. 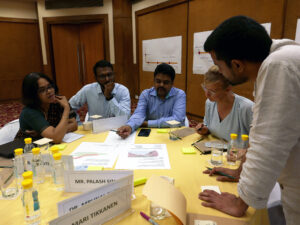 The meeting activities were kicked off with a discussion of what qualifies as a ritual and how rituals interweave into daily life. “The discussion touched upon a wide range of rituals in different cultures from ancient Egypt to modern-day Brazil and India”, tells tells Priyam Sharda, M4IDs Design Research Lead.

“Rather than simply present what a ritual is, we wanted to do this through activities. We sparked a very interesting discussion by introducing a wide range of rituals from different cultures. The advisory board members were asked to guess which ritual was connected to which problem-solving or wish, time period, and geographic location. The guesses ranged drastically, and it quickly became clear how differently everyone perceived rituals, how complex rituals can be, and how explaining them could be even harder. The aim was to explore and unpack the concept”, Sharda explains.

“Our discussions showed, how rituals aren’t necessarily very extraordinary. In one of our activities, we asked the board members to design their own rituals around working principles in an advisory group such as this. One group was given the concept of ‘effective communication’, and they used as an example, how people sometimes put a hand on their heart when they want to ensure the other person that their communications is truthful. We don’t think of this as ritualistic, but rather everyday communications”.

Learnings and next steps

M4ID’s Programme and Evaluation Manager, Shalini Subbiah, tells us that a key point of the activities was to convey, that rituals were a product of their cultural surroundings. 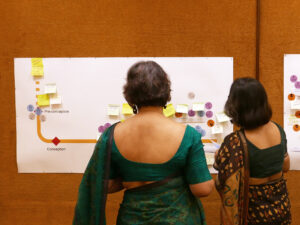 In India, the practice of “Chhathi” is an example of rituals related to newborn health. The tradition includes a ceremony on the evening of the 6th day after the child’s birth, where the Goddess of Destiny, Vidhaata, is requested to write the baby’s destiny by placing a lamp, a pen and a piece of paper on a wooden plank. The mother then holds the baby by an altar with photos or statues of gods and goddess, and the baby’s footprints are printed on a blank paper or cloth with red powder which is soaked with water.

“To the outside world, there may not seem to be an obvious benefit to a ritual on the surface level, but within the context of the users and creators of the ritual, it makes perfect sense”, Subbiah continues.

Finally, the advisory board proceeded to discuss what the RISE project could explore next. “We are at an interesting point right now”, Subbiah explains.

In November, UT Austin is about to launch into large scale data collection that will involve surveys, interviews, and ethnographic research with thousands of women in Bihar.

Subbiah says that M4ID’s RISE team and UT Austin look forward to these next steps now that the advisory board has been officially formed and is going to become more actively involved in the project.